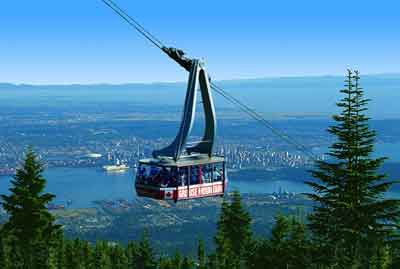 There are two other routes to North Vancouver. The Iron Worker’s Memorial Bridge named in honor of 19 workers who were killed in a tragic accident when the bridge collapsed during construction on June 17, 1958 plunging 79 workers 30 meters (100 feet) to the water below. The third route to North Vancouver is by passenger ferry boats we call Sea Buses. The boats run frequently and the Vancouver terminal is just steps from Gastown and walking distance to Davie Village. The Sea Bus arrives at Lonsdale Quay (see our link below) and is a major hub for our public transit. You will find a public bus to your North Vancouver tourist destinations located at the North Vancouver Sea Bus terminal. And remember your Sea Bus ticket can be used on the public transit bus to your final destination!

The North Shore has lots to offer. Hike though old-growth rainforest in the many parks or view these magnificent trees from the Capilano Suspension Bridge & Cliff Walk, ski on one of the three local mountains, Grouse Mountain, Cypress Mountain (West Vancouver) or Mount Seymour. After a morning of sightseeing or skiing spend a leisurely afternoon dining on alder-grilled salmon and microbrewery beer followed by coffee on the waterfront of North Vancouver at Lonsdale Quay Market.

Things you must see when visiting North Vancouver

Capilano Suspension Bridge Must see one of the most popular tourist attractions in Vancouver, British Columbia. Read more

Cleveland Dam is an impressive spillway nearing 300 feet, holding back the 670-acre man-made Capilano Lake, which provides the wonderful, pure drinking water for much of the Greater Vancouver region. Read more

Grouse Mountain Vancouver’s Must see (not on a rainy day though) number one, four-season attraction with a variety of cultural, educational and outdoor adventures to choose from. Read more

Lynn Canyon Park officially opened to the public in 1912 and has been a popular destination among tourists and local residents of Lynn Valley. The suspension bridge is FREE. There is also an Ecology Centre to visit at the park. Lots of hiking trails. Read more

Lonsdale Quay Located on the shore of North Vancouver with a fabulous view of Vancouver’s skyline and harbour, Lonsdale Quay Market boasts a produce, shops, and eat-in or take-out restaurants.  From Gastown, hop on the “sea bus” and cross the inlet.  The sea bus takes you right to the heart of the action. Read more

Maplewood Farm Museum of Vancouver is a unique and enjoyable time for all ages in a rural heritage setting on 2 hectares (5 acres) in North Vancouver. Read more