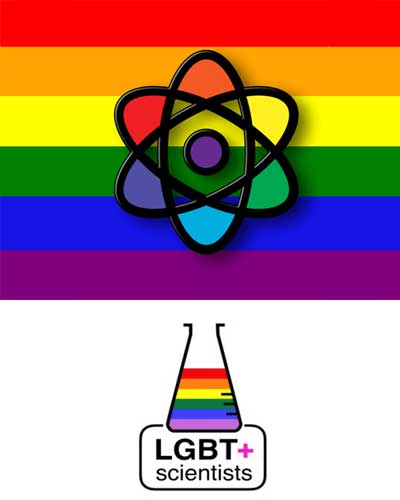 STEM stands for Science, Technology, Engineering, and Mathematics. Today as in many careers, LGBTQ people still struggle to be themselves in this work environment. Today approximately 57% of LGBTQ people working in STEM are out at work. (Compared to 47% of the national average in the US, not what we would call a success story for academia). LGBTSTEM’s goal is to increase visibly of scientists. Being able to share personal experiences makes for a better work environment and sometimes the personal lives of scientists even inspire the work they do.

Even today other than astronaut Sally Ride and Alan Turing a prominent computer scientist who helped Britain win WWII by breaking the secret codes used by the Germans, few names come to mind. After the war Turing was prosecuted for being gay and later committed suicide.

The first LGBTSTEM took place in 2018. The date is July 5 or if you prefer 5 July. Why July 5?  When written in numerical format, this date is 705 or 507.  These numbers reflect the wavelength, in nanometers, of the colors red and green on the rainbow flag. They also represent the themes of nature and life, respectively.

LGBTSTEM day was changed to November 18 as a result of an open survey and months of discussion.  The date is symbolic of the 60th anniversary of American Astronomer and gay activist Frank Kameny’s US Supreme Court fight against workplace discrimination, a fight that continues today not only in the US, but in so many other countries worldwide.

Why is LGBTSTEM Day important?

LGBTQ people in STEM continue to struggle to openly be themselves. A day of recognition could go a long way towards helping raise awareness and to increase support. This should be a new and important component of the global push to increase diversity and inclusion in STEM.

In the early days of our gay history, some 50 years ago, gay people / LGBTQ people, were activists. They were activists by necessity.  These pioneers risked everything, their families, friends and jobs to come out and start demanding that homosexuality not be considered an illness that needed to be treated and cured, but that we were in fact normal caring and loving people worthy of the same rights as everyone else in society.

Today as we are being accepted into mainstream society the next generation of LGBTQ people will become the role models for tomorrow’s queer youth. Today we have many openly LGBTQ people who work as politicians, police officers, teachers, doctors, and business professionals. For the first time we are seeing openly gay / LGBTQ role models who are every bit as important as our early gay pioneers because these role models  will inspire our queer youth of today to be who they are so they can grow up to be the openly LGBTQ leaders in the world of tomorrow.

Read more about this event at Science World.